Yeah, guess how well the girl with severe anxiety and panic disorder is dealing with the fact that she’ll be having a fucking organ removed in 10 days? 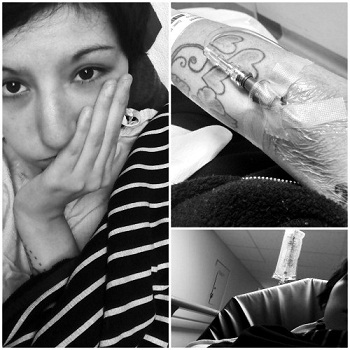 Not so much. At all.

As far as surgeries go, this is one of the more minor ones. I know that. Everyone is telling me this. But I already know and just repeating the same thing to me doesn’t help.

They ask what scares me about it – fucking everything. Hospitals in general, IV’s – two things I’ve encountered way too fucking often lately. What if I my anxiety gets too out of hand and I have a panic attack while they’re getting me ready to go under. I get dizzy and emotional, I can’t think properly therefore I can’t speak and say what’s wrong, and on a few occasions, I feel so faint that I actually pass out. Hell, maybe that’d work in my favour…

I was talking with my doctor today at an appointment, and pathetically typical me asked what if I wake up, to which she responds “That doesn’t happen anymore.” But it happened. Great.

Then there’s that whole bitch of a thing – being put to sleep. I’ve had to do it once before for my wisdom teeth – didn’t like it then, don’t like it now. It’s the most vulnerable state – a room full of strangers, an operating table. Some person controlling the drugs being pumped into you to make you sleep and others with scalpels and god knows what other medical shit to get the organ out. Also what the hell do they do with the organ?

Recovery. Pain. I can’t deal with the thought of having a fucking staple punched into me – knowing it’s there and then having it removed. Surgeons are often lazy – staples are quicker than stitches, doc says. But she’ll make a note about it, and she’ll be there to assist to help me feel more comfortable.

A few people have asked if I’m actually going to do it, have the surgery. They see the level of anxiety it’s causing that they’re actually asking.

I’m in pain. A lot of pain, everyday. It’s happening no matter how much I cry and bitch about it. I don’t want to have to take these pain meds every single day. I don’t want the decision to be taken away from me if it suddenly becomes an emergency.